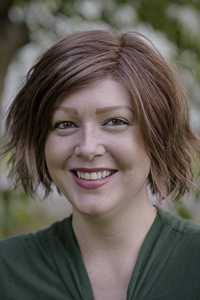 Leah Odeneal teaches in the Emergency and Security Studies program at SoPA. She received her undergraduate degree in Geosciences from Mississippi State University in 2006. Soon after, she made her way to the Gulf Coast to earn an M.A. in Communication at the University of South Alabama. Ms. Odeneal has served as an Emergency Manager for the American Red Cross. During her time at the Red Cross she participated in various disaster response operations across the United States including Hurricane Isaac, Hurricane Sandy and the April 2011 Tornado Super Outbreak. She continues to serve her community by leading a support group for the National Alopecia Areata Foundation and as a leadership volunteer for Evacuteer.

If you could be on any reality TV show, which would you choose and why?
I would love to go on the Amazing Race, in spite of the fact that I've experienced a few mishaps abroad that might indicate I'd go home early.

What's the first career you dreamed of having as a child?
In second grade I decided I wanted to be a broadcast meteorologist. It took me a few years but I eventually discovered I was more dedicated to helping people prepare for & respond to disasters than reporting them.

If you could travel anywhere, where would you go?
My favorite place to travel to is any place I've never been before.