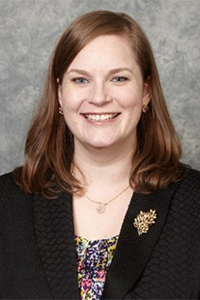 Prior to joining the Mount Sinai Health System, Ms. McPherson was Assistant Director of the Center for Health Innovation (CHI) and taught in the Emergency Management program at Adelphi University. While there, she concentrated her work on community-based social resilience initiatives. Prior to joining Adelphi in the fall of 2011, Ms. McPherson spent four years as both the Grants Manager and the Energy Assurance Program Manager in the Governor’s Office of Energy and Planning in New Hampshire. While in this position, one of Ms. McPherson’s roles was to support the State Emergency Operations Center during disasters by ensuring continuity of the energy supply in New Hampshire.

Mr. McPherson is a seasoned emergency manager, having worked for James Lee Witt Associates in Washington, DC. While there, she was deployed multiple times to Louisiana to support the recovery efforts following Hurricane Katrina. Additionally, Ms. McPherson served as a graduate assistant for ranking members of both the House Committee on Homeland Security and the Senate Committee on Homeland Security and Governmental Affairs on Capitol Hill.

She is credentialed as a Certified Emergency Manager (CEM), a certified National Healthcare Disaster Professional (NHDP-BC), serves on the Inaugural Board of Advisors of The Order of the Sword and Shield, and serves on the Advisory Board of the International Journal of Security, Preparedness, and Resilience Education. She was also honored in 2011 as one of New Hampshire’s Top 40 under 40.

Ms. McPherson earned her B.A. at the University of New Hampshire in political science and her master’s degree in public policy with a concentration in national security policy from The George Washington University.

What advice would you give to someone who's considering finishing their degree, or starting for the first time as an adult?
As George Eliot said, "It is never too late to be what you might have been." It doesn't matter what career you are in now or how long it has been since you were in a classroom. You need to know that you CAN do this. Know that everyone at this institution is pulling for your success.

Who has influenced you most in life?
A cadre of amazing teachers who never let me give up on myself at every stage of my education. I would have never been able to write this bio without the steadfast encouragement of Kirc Martin, Kathy Little, Thomas Quigley, Colonel Lionel Ingram (ret.), and Marcus Raskin.

If you could be on any reality TV show, which would you choose and why?
As an EM, I would want to be on one of the storm chasing shows, but just for a season as I don't think my Mum and Dad could take the stress!