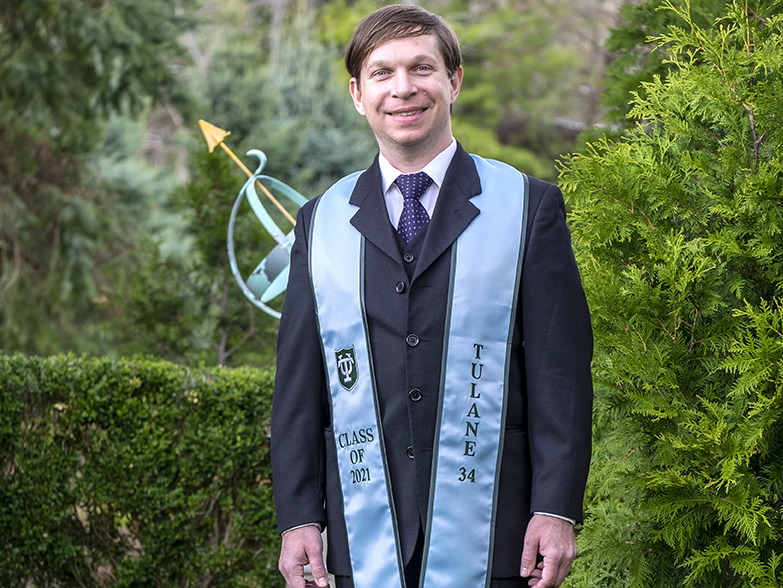 Tony Massarello, a 2021 graduate of the Tulane School of Professional Advancement, is also the recipient of the prestigious Tulane 34 Award. (Photo provided)

Jazz. Blues. Rock and roll. All are part of the soundtrack that led Chicago native Tony Massarello to New Orleans and ultimately to the Tulane University School of Professional Advancement (SoPA).

His journey through life, he says, is rooted in music. He’s played piano and trumpet since age 7 and developed a love for percussion at age 13. Today, he is known locally as DJ Sight Unseen and serves as the co-music director for WTUL New Orleans 91.5 FM, a community radio station that broadcasts from Tulane University.

Massarello, who lived in New York at the time, first planned to visit New Orleans with a friend and fellow musician in 2005. The music scene was their primary reason for heading to the Big Easy, but Hurricane Katrina changed his motive.

After witnessing the hurricane’s devastation, Massarello decided to help New Orleanians rebuild their homes. He relocated to Louisiana in 2007 and rebuilding efforts became his full-time interest.

“My father is a carpenter and one of my first jobs was working alongside him,” said Massarello. "I learned a lot from him about not only construction, but also integrity, honesty, and good work.”

He continues to volunteer his time and skills in support of New Orleans' communities.

Upon arriving in New Orleans, Massarello volunteered alongside locals to help them piece together what had been lost. He also used his platform as a DJ, musician, and event organizer to help local nonprofits raise funds for their missions. Then, as New Orleans began to feel more like home, he decided to advance his education through SoPA where he double majored in Exercise Science and Social Sciences and earned a degree through SoPA’s Kinesiology Program.

Massarello, a recipient of the prestigious Tulane 34 award, recalls a conversation with Lanie Dornier, director of SoPA’s kinesiology program, being a determining factor in his reason for pursuing his bachelor's degree at Tulane SoPA.

“SoPA was a wonderful experience. I was on the fence about what school to attend and Dr.  Dornier laid out the perks of SoPA in the most beautiful and honest way,” said Massarello. “After that meeting, there was little that could be done to convince me to go to any other program. It was a great decision.”

While his ultimate goal is to pursue a career in physical therapy, a “love of languages” takes him first to a summer Mayan language immersion program through Tulane’s Center for Global Education.  He will begin work on a master’s degree in linguistics this fall.