From the front line to the classroom: Tulane professor brings extensive, firsthand experience to SoPA students 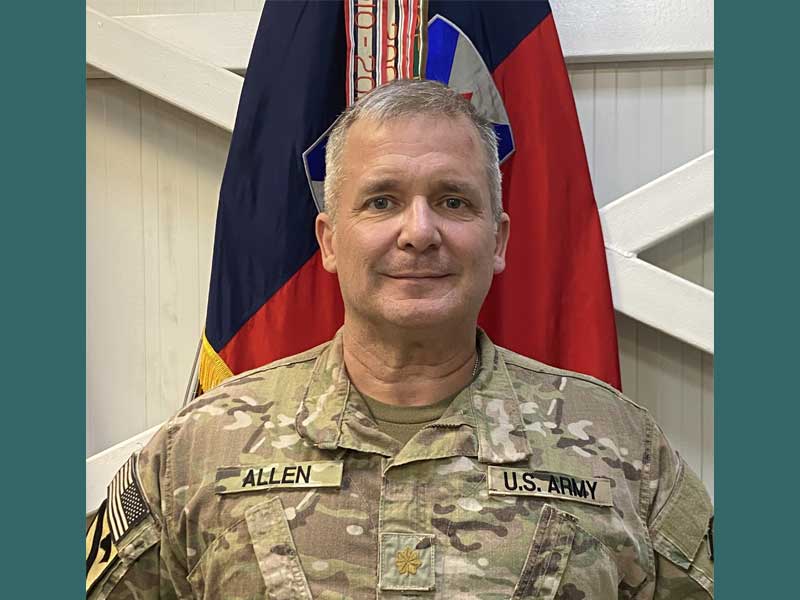 Many have worked remotely this year, but few as far from home as Robert Allen, who teaches in the Tulane School of Professional Advancement’s (SoPA) Emergency and Security Studies Program. A United States Marine veteran and a member of the Louisiana Army National Guard, Allen is currently deployed in the Kurdistan region of northern Iraq as a member of the 256th Infantry Brigade Combat Team of the Louisiana Army National Guard. He serves as the public affairs officer, spokesperson and civil affairs officer.

Allen and his unit are part of Combined Joint Task Force - Operation Inherit Resolve, a global coalition of 77 nations and five international organizations operating in Iraq at the request of the governments of Iraq and Syria in support of a lasting political settlement based on United Nations Security Council Resolution 2254.

“A person can have a master’s degree, PhDs or graduate certificates. However, when you have someone with the education and the experience, that person brings a specialized wealth of knowledge to their respective field.”
— Robert Allen, SoPA adjunct professor

Two weeks ago, Allen and his unit stationed near the Kurdish regional capital of Erbil came under a rocket attack from ISIS, which killed one foreign civilian contractor while injuring five other civilian contractors and one U.S. service member. It is the deadliest attack on U.S.-led coalition forces in nearly a year.

Unharmed, Allen was pressed into duty following the attack, telling a local television station that all soldiers and members of the Coalition forces responded as they had been trained. These are lessons he hopes to share with his students once he returns in January 2022.

“I always want our students to get out of their comfort zone, think outside the box and be innovative. I don't want a nice ‘cookie-cutter’ answer to a problem set. I've spent most of my life in the intelligence community and seen some brilliant minds come up with amazing ways to gather information without quoting manuals or doctrine,” Allen said.

One of the cornerstones of SoPA’s approach to teaching is the hiring of professors who can take their firsthand, real-world knowledge and apply it to a classroom setting with the goal of preparing the next generation of students to be leaders in their respective fields.

Allen believes lessons learned from real-world experiences are some of the most valuable tools to equip SoPA’s students, many of whom are already working on the front lines while also taking courses at Tulane.

“A person can have a master’s degree, PhDs or graduate certificates. However, when you have someone with the education and the experience, that person brings a specialized wealth of knowledge to their respective field,” Allen said. “Our program (Emergency and Security Studies) has military members, federal officials and private corporation executives.”

“Robert is actually one of our top professors and has already won a couple of teaching awards, including the prestigious John Percy Dyer Award, which is considered one of SoPA’s top faculty awards,” said Michael Wallace, director of SoPA’s Emergency and Security Studies Program. “Robert is very engaging with the students. I know many students have reached out to him outside of class to ask for letters of recommendations or to talk about careers in the military, intelligence and counterterrorism. He is very open and very free with his time to help students. Robert is dedicated to the concept of training the next generation of homeland security and emergency management professionals.”

Allen made his first appearance at Tulane as a guest lecturer. Following a tour in Afghanistan, he was approached by a fellow service member, who was also an adjunct professor for SoPA, to share his experience with the class.

“A friend asked me to guest lecture for him when I came back home from working in Afghanistan on a classified program. I conducted a few guest lectures and after each course, I asked the students to fill out a critique. I then started to contact (Michael) Wallace every chance I got and sent him all of the critiques. Eventually, I think he realized I wouldn’t go away and brought me on board,” Allen said.

Allen first taught undergraduate courses in international and domestic terrorism as an adjunct professor in 2017. Two years later, he began teaching graduate courses in risk management and threat assessment in 2019. Whether it’s teaching undergraduates or professional students, Allen pushes his students to “be innovative” and develop solutions in an atypical manner to succeed.

Allen arrived in the combined joint operation area earlier this year but, due to operational security, is unable to say when he will return stateside.

“With his civilian and military background, he already has brought a lot of real-world experience and situations into the classroom for students to learn from, and his most recent deployment will continue that trend when he returns to his teaching role,” Wallace said.

“I feel like I am part of something special in my position with SoPA. Our students, faculty and staff are nothing short of amazing. I am in an environment where I am constantly being challenged, and I love it. You have to stay on your toes with the students. They can tell when you're not on your game,” Allen said.