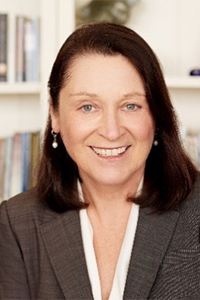 Caren is principal of a Croland Consulting (2016 – present) a private practice that guides families and businesses in building a culture of purpose.

Caren served as President of Crown Family Philanthropies in Chicago, (2009-2016) managing organizational redesign and growth, actively engaging multiple generations, and guiding strategic initiatives in the U.S., the Middle East, and the developing world.

Caren built Oprah Winfrey’s philanthropies, as Executive Director (2000-2009) at the height of the Oprah Winfrey Show, a period that included Oprah’s Use Your Life Awards, the Oprah Winfrey Leadership Academy for Girls in South Africa and the Oprah Winfrey Boys and Girls Club in Kosciusko Mississippi, where Oprah was born. She led disaster recovery and rebuilding in the Mid-South following Hurricane Katrina that put fourteen hundred families back in homes. While at Harpo, Oprah’s production company, Caren was a member of the Senior Management Team.

Caren is currently a partner in Entertain2Educate (2016-present) a producer of entertaining and fun continuing ed courses on ethics for wealth advisors. She is Acting Chair of The Poetry Foundation (which received a $200MM bequest from Ruth Lilly in 2003), a member of the Board of Visitors at the Lilly Family School of Philanthropy at Indiana University, a Board Advisor at the Women in Philanthropy Institute (WPI), and an Advisor to the Pardee RAND Graduate School of Public Policy at the RAND Corporation.

She is a frequent keynote speaker at wealth management and estate planning conferences. She is an adjunct professor at Johns Hopkins (2020) in the Sports Impact Leadership Certificate program and speaks regularly at the University of Chicago Booth School and Northwestern Law. Caren is a reviewer/advisor to the MacArthur Foundation and a coach to graduate students at the Spertus Institute in Chicago.

Caren understands the social change landscape. Her engagement in the sector has spanned media (Time, WSJ, Country Living) and startups like Leading Edge, formed to build organizational capacity in nonprofits. She has developed economic and education programs in Africa in collaboration with the Nelson Mandela Foundation and through public private partnerships and worked extensively in Israel and the Middle East on cross boarder projects related to coexistence and the environment. She holds a degree in Broadcast Journalism from Emerson College and studied Speech and Language Pathology at Mercy College and nonprofit strategic leadership at Stanford.

Caren’s governance experience includes associations like Forefront (formerly Chicago Donors Forum), where as a board director she chaired Board Development and Executive Search Committees and the Jewish Funders Network as a director and Finance Committee member. She chaired the Council on Foundations’ 2013 Annual Conference in Chicago, and two Council awards committees for excellence in grant-making. She has guest lectured at NYU Wagner and Duke.

In her spare time Caren hosts salons that bring bold thinkers together for meaningful conversations. Caren’s passion is listening deeply, navigating challenges, and guiding people who have the potential to make the world a better place