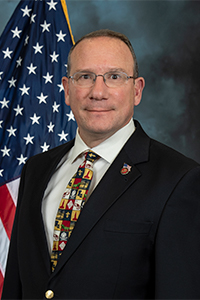 Ignatius Liberto is a seasoned and experienced strategic thinker and executive leader with more than three decades of experience in the U.S. Military and private sector with expertise in leading change, policy formation, team building, resource management, and business operations planning, programming, budgeting, and execution. He joined the Tulane University adjunct faculty in 2021.

In 2020, he joined Department of Energy (DOE) and is currently the Director of Cybersecurity Compliance and Oversight with the DOE’s Office of the Chief Information Officer. He also serves as the DOE’s enterprise Authorizing Official Designated Representative. He and his team are responsible for building and implementing Department-wide risk-based cybersecurity programs and awareness training, providing guidance and consultation for emerging trends, managing the comprehensive Authorization and Assessment process for all enterprise systems, and leading the DOE’s biannual CyberFIRE event.

Prior to joining DOE, Ignatius was a Department of Defense (DOD) Civilian with Joint Force Headquarters - Department of Defense Information Network (JFHQ-DODIN) for three years. JFHQ-DODIN executes global Command and Control of DODIN operations and defensive cyberspace operations (DCO). He initially supervised his newly formed organization’s Full Operational Capable readiness assessment and certification as a component of United States Cyber Command and was then assigned as the Chief of Staff, where he served as the principal advisor to the Commander and was responsible for the extensive breadth and depth of internal staff integration and warfighting functions supporting the command’s global mission. In addition, he prioritized and directed the Commander's decision-making cycle to synchronize DCO and defensive measures/countermeasures and to synthesize global intelligence sharing which enhanced the protection against adversary cyberattacks and enabled U.S. military power projection, freedom of action, and mission assurance across all warfighting domains.

Before JFHQ-DODIN, he served for 30 years as a U.S. Marine Corps Infantry, Force Reconnaissance, and Joint Qualified Officer where he commanded and led numerous diverse Marine, joint, and multi-national organizations at increasing echelons of authority and responsibility during a myriad of world-wide deployments and combat operations. He also worked as a senior director and program manager for cleared defense contractor companies managing distinctive portfolios on several classified DOD programs and systems. In addition, he was an on-line instructor for the U.S. Marine Corps University’s Command and Staff College for six years.

Ignatius completed his undergraduate work at Tulane University in 1984 where he earned a Bachelor of Arts in History and, in 2011, he earned a Master Certificate from Villanova University in Applied Program Management. Over the past years, he attended several programs and executive courses at the U.S. Army John F. Kennedy Special Warfare Center, Harvard Kennedy School, Marine Corps University, National Defense University, and U.S. Naval War College. In 2021, he earned his Master’s Degree from Tulane University, School of Professional Advancement in Cybersecurity Management, and also a Master’s Certificate in Cyber Defense.

Ignatius believes in life-long learning, and is passionate about being a trainer, coach, and mentor to those within his sphere of influence. An enthusiastic student of history, he enjoys sharing interesting stories about our past with anyone willing to listen. While Ignatius’ background is deeply rooted in New Orleans, he currently lives in northern Virginia, and enjoys the adventure lifestyle with his wife and dogs in the Appalachian Mountains.