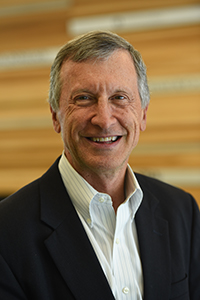 Born and raised in Rochester, New York, Mark received his BS degree in Finance from Boston College and an MBA in Marketing from Tulane. He joined IBM in 1981 and received many awards including Rookie of the Year in the Southern Region and a Golden Circle award in 1988. Mark voluntarily left IBM in February 1994 and helped formed Communiqué, a New Orleans based Internet Service Provider (ISP).

As President of the company, Communiqué quickly became the Gulf South’s fastest growing ISP building a client base of over 10,000 users focusing on small to medium size businesses. After Communiqué was purchased in 1997, Mark left a year later and formed EyeOnet, an Internet sales and marketing consulting firm which then merged with two other businesses to form a full-service network and Internet services company called Orange Twine.  In November of 2000, Orange Twine was chosen by the New Orleans Chamber of Commerce as the Rising Tide Small Business of the Year in Technology.

In October of 2002, Mark assumed the role of President of the Louisiana Technology Council (LTC) to assist with the technology development of Louisiana.  In November of 2005, Mark was selected by the Governor’s office as Technology Leader of the Year for the State of Louisiana.  Through his leadership, Louisiana became one of the top three states in the country in technology job and wage growth.

As President of the LTC, Mark has been the commencement speaker for ITT Technical Institute and Remington College on the “Elements of Success after you Graduate.” He has spoken at the graduating class of Operation Hope on the “Trials and Tribulations of Being an Entrepreneur” and has also given annual presentations to the Louisiana Technology Council membership on the state of technology in Louisiana.  He has also written several articles on Entrepreneurship for Silicon Bayou News.

For the past twelve years, Mark continues to appear live on WWLTV’s (Channel 4) monthly TV program called “Digital Gumbo”, which provides the latest developments in technology advancements; and he helps promotes local technology companies throughout the region.  He has also participated on numerous panel discussions throughout his career on entrepreneurship and technology.

In November of 2012, Mark left the LTC to become a principal partner and then became the Managing Director in the business management and executive coaching firm, Simmons & White (S&W).  As the sole owner of S&W, Mark recently adopted his old company name Communiqué, because of its tremendous success back in the late 90’s.  Mark coaches entrepreneurs and small businesses on their drive towards success while also helping organizations develop business strategies for growth and prosperity.  For the past 8 years, Mark has been the Project Coordinator for Louisiana’s largest Annual IT Symposium, developed specifically for CIOs, CTOs, VP’s of IT (etc.) and their direct reports.

Mark has self-published two Give A Damn books with the most recent book called, GIVE A DAMN! – The Ticket to Cultural Change.