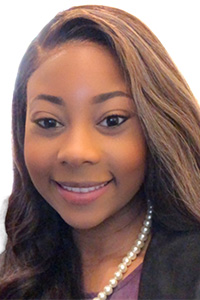 General Legal Studies senior and future lawyer Kasha (Kash)Weir, who not only works full-time as a paralegal and excels in her classes, but also serves as a Peer Mentor to other GLSP students.  Kash has been inducted into SoPA’s Alpha Sigma Honorary, placed on the Dean’s and President’s Lists each semester since she became eligible, and awarded the coveted Osher Scholarship.  She also is an active member of the Baton Rouge Paralegal Association, a volunteer for the Greater Baton Rouge Court-Appointed Special Advocates, and a national member of the NAACP and National Black Law Students Association.