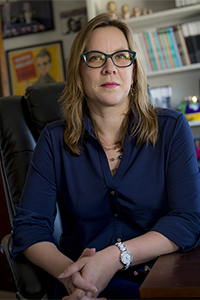 J. Celeste Lay an associate professor in the department of political science at Tulane University. She earned my Ph.D. in Government and Politics at the University of Maryland, College Park in 2004 and her B.A. in Political Science from the College of Charleston in 1998. She authored A Midwestern Mosaic: Immigration and Political Socialization in Rural America, as well as several peer-reviewed political science journals. Her research broadly examines political behavior, including political socialization, public opinion and voting behavior. In addition to understanding how children’s attitudes toward politics develop, she is most interested in the interplay between political attitudes and knowledge about public policy – especially immigration and education policy – and voting and support for political parties and candidates. She is the director and creator of the Summer Minor Program in U.S. Public Policy at Tulane and the co-director for the New Orleans chapter of the Scholars Strategy Network, a nationwide organization dedicated to bridging academia and public policy.