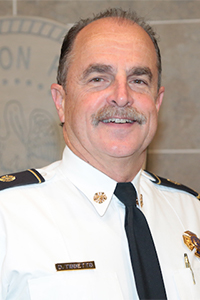 Chief Tibbetts began his fire career as a member of the New Orleans Fire Department in 1978.  He spent many years assigned to the heavy rescue squad. At the time of his retirement from the NOFD in 2002 he was District Chief in charge of the Special Operations Division and Training School.

Chief Tibbetts was on site at the Oklahoma City Bombing in April 1995. He was also the Operations Section Chief for the Brightfield / Riverwalk Shopping Mall Collision in New Orleans, LA in December 1996.

Chief Tibbetts spent the next 10 years working for the United States Government as a private contractor and SME in the field of Incident Management, Counter Terrorism, and Domestic Preparedness. His assignments included the Center for Domestic Preparedness in Anniston, Alabama, as well as, missions throughout the continental United States. He prepared cities for events such as the Olympics, G 8 Summits, Super Bowls, and other national security events.

From May 2012 to June 2017 Chief Tibbetts was the Fire Chief of the New Orleans International Airport.

Chief Tibbetts graduated with honors from Tulane University School of Continuing Studies with a degree in Homeland Security and was the recipient of the prestigious Tulane 34 award.

Chief Tibbetts lives in the greater New Orleans area with his wife Claudia and is the proud grandfather of four grandchildren.