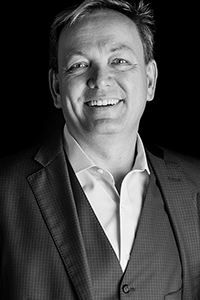 A graduate of Rutgers University in New Jersey, Mr. Reade started his first funded company in 1995 in downtown Manhattan using software he created to provide outsourced email services. In 2000 he moved his growing company to New Orleans, attracted by the legendary culture and the arbitrage opportunities that cost of living differentials created between the East and West coast IT-centric cities and the Greater New Orleans area. In 2003 he renamed this company Carrollton Technology Partners and took on three partners.

In 2013, the company, now called Carrollton Group and having over 150 employees, split up into sister-companies. Mr. Reade runs the Enterprise Services division of Carrollton Group as Carrollton Enterprise Services and renamed the software development division LookFar and changed its focus to startup companies. LookFar focuses on Idea Acceleration, which is a process that helps young companies that have a technology component to their business to focus and grow. This includes software development paired with a structured approach to building solid companies from the ground up.

LookFar founded the Ada Lovelace Woman of the Year in Tech award in 2015, which recognizes the woman who has made the greatest contribution to Technology in the GNO area. The company achieved Inc. 5000 status in 2015 and was named the City Businesses 2015 Best Place to Work for companies with under 100 staff and was named as one of the Best Places to Work in 2016 and 2017. The company was named to the Nola 100 in 2016 and was a 2016 recipient of the Downtown Development District’s Downtown NOLA award.

Carrollton Enterprise Services focuses on large engagements, including significant work on disaster recovery projects such as the Road Home, the Deepwater Horizon Economic Claims Center and work at the National Finance Center in New Orleans East as well as work in large healthcare operations and insurance companies and both State and Federal Government projects, including current work on the United States Census.

LookFar’s investment arm, LookFar Ventures, has made numerous direct investments in startups over the last two years, as well as gained equity in many others through the work of the company with early-stage companies. In the last two years LookFar has touched over 200 start-ups, worked directly with over 30 and built software for over a dozen.

Mr. Reade is CTO or senior technical advisor to several start-ups and a frequent speaker on the topics of technology and disaster recovery. He has contributed to the judging of many start-up and business plan competitions including Start-up weekend, the TechCrunch Pitch, Tulane’s Business Model competition and most recently coached in Loyola University’s Lean Startup program and helped create its certificate in Software Development, whose first class graduated in August of 2017.

Some past involvements in civic life include six years work as a board member of SciHigh, including being involved in the decision to split the board and schools in SciHigh and SciAcademy. He was a founding board member of CourtWatch NOLA, a board member of the NPR affiliate WWNO and a 2005 graduate of CBNO/Mac. In 2007 he was awarded the Liberty Bell award by the Bar Association for his work in Criminal Justice and was YLC’s Leadership Mentor of the Year in 2003. In 2015 he was recognized as one of City Business’ Money Makers of the Year and was one of 2016’s Downtown NOLA awardees. For 10 years he was the voice of the GNOInfo Minute, a role he wrapped up in September of 2016.