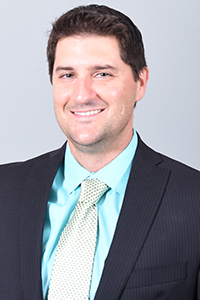 Travis Detillier is an Audio/Visual Tech at Tulane University. His team designs the solutions and supports the technology in Tulane’s academic spaces. Travis strives to bring innovative hardware to the classroom while still keeping it simple and approachable.

In the summer of 2020, in conjunction with the Innovative Learning Center, the A/V team completed its most ambitious IT Project to date: rebuilding 175 classrooms to accommodate hybrid learning and social distancing. Prior to such a massive undertaking, Travis and the A/V team installed videoconferencing systems in departmental spaces as well as refreshing older classrooms to current standards.

Before joining Tulane IT in 2016, Travis spent 10 years as the Director of Video for Tulane Athletics. He earned a B.A. from the University of New Orleans and an M.P.S. from Tulane University.

Mr. Detillier believes that the best song to test an audio system with is Mark Morrison’s “Return of the Mack.” When not working or spending time with his family, he enjoys the Fast and Furious films. He believes all of the films in the franchise to be a “10/10,” however, he concedes that Fast Five is the best of them.