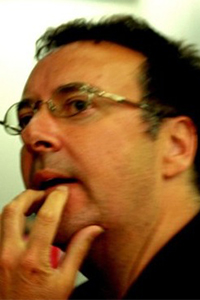 Jay Murphy is a writer and independent curator who is author of New Media and the Artaud Effect (Palgrave Macmillan, 2021), and Artaud’s Metamorphosis (Pavement Books, 2016), described as “beautifully crafted, thought-provoking,” “stunning,” and “essential reading for anyone interested in the madness of the 20th and 21st centuries.” He has thrice been a finalist for Sundance Screenwriting Labs and his collaborative Internet projects have been shown at the Sundance Film Festival. He has contributed to CTheory, Art Journal, Deleuze Studies, Parallax, Culture Machine, Frieze, MAP, Afterimage, Parkett, Art in America, Metropolis, and Third Text, among other publications and was a correspondent for Contemporanea. His essays have appeared in The Progressive, In These Times, and other forums. He edited the book anthology For Palestine (1993), described by the The Sunday Times of London as a "powerful mixture of statistics, literature and journalism...Considered reactions to Operation Desert Storm are provocative and revealing;;” and his work with artist Carolee Schneemann led to her 2002 MIT Press collection.

In 2009, 2011, and 2014, he organized exhibitions and programs of film and moving image work from the Middle East and North Africa for venues in Aberdeen, Dundee, Edinburgh, and Glasgow; in 2011-12 the film series "First Person" for Inverleith House/Filmhouse Cinema in Edinburgh; and in 2008 gallery exhibitions in New York and Edinburgh. He was editor and publisher of the alternative journal Red Bass; his Red Bass interviews with figures such as John Cage, William Burroughs, Allen Ginsberg, Emile de Antonio, Edward Said and Kathy Acker were all anthologized and republished. Among his current projects is assembling a creative nonfiction book/web project culled from the Middle East and other environs called Baraya/Perimeter. He holds an MA in philosophy & critical studies from Antioch University (1993) and a doctorate in modern thought from University of Aberdeen (2011).