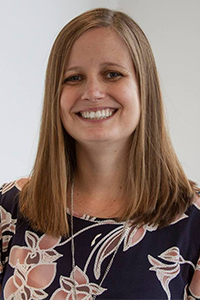 Kayla Jutzi is Senior Instructional Designer and faculty developer who has worked in higher education since 2009, joining SoPA in 2019.

Kayla holds a master's degree in higher education administration and a graduate certificate in instructional design from The George Washington University in Washington, DC. She also holds a bachelor's degree in Organizational Communication from The University of West Florida.

Prior to joining SoPA, Kayla served in various admissions and student services roles at The George Washington University and then as the Lead Instructional Designer at Columbia College Chicago Online.

In her spare time, Kayla volunteers with her sorority, Alpha Chi Omega, loves to spend time outdoors and with her husband and dog, Daisy.

What is your favorite thing about SoPA?
Definitely the people! Everyone has been so welcoming. It's been a great transition from Chicago back to the south.

What is the best advice you've ever received?
Failure is a key to learning and improvement.

What advice would you give to someone who's considering finishing their degree, or starting for the first time as an adult?
It's never too late and it's never going to be the "right" or "perfect" time. Even if you take one class at a time, every semester will serve as an achievement to completing your goal. I went back to school for instructional design in 2016, the same year that I got married and then moved to Chicago. It was a whirlwind of a year but I'll never regret it making that decision, which led to my career change to instructional design.