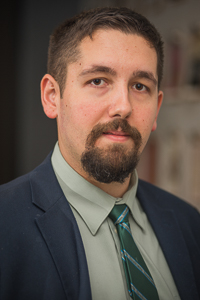 Joseph Toth is a project manager for AT&T in New Orleans. He attended the Tulane School of Continuing Studies, earning his bachelor’s degree in applied computing, before going on to become the first graduate of SoPA’s Master of Professional Studies in Computing Technology. Joseph received his PMP certification in 2014 from the Project Management Institute.

After growing up in Connecticut, he enlisted in the United States Navy. He served for seven years as an Electronics Technician. He was stationed in several places around the country before settling in New Orleans with his wife in 2011.

In his downtime, Joseph can be found participating in neighborhood events, watching and debating the finer points of whatever sporting event is on the television set, and trying to keep up with his wife and twins.

What is your favorite thing about SoPA?
The timing of the classes. You are able to work full-time and still attend class.

What advice would you give to someone who's considering finishing their degree, or starting for the first time as an adult?
In both cases, you are entering a new chapter of your life. Be aware of how that chapter fits into the larger story of your life. Plan ahead - know what you need to do in the next 6 months, 1 year, and 2 years to achieve your goals.

What is the best advice you've ever received?
"There is no easy way. There is only hard work, late nights, early mornings, practice, rehearsal, repetition, study, sweat, blood, toil, frustration, and discipline." - Jocko Willink