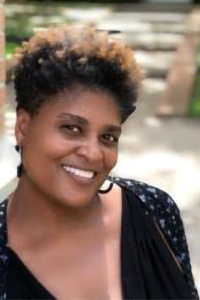 Froswa’ Booker-Drew, Ph.D. is a Network Weaver who believes relationships are the key to our personal, professional and organizational growth. She has been quoted in Forbes, Ozy, Bustle, Huffington Post and other media outlets, due to an extensive background in leadership, nonprofit management, partnership development, training and education. She is currently Vice President of Community Affairs for the State Fair of Texas responsible for grantmaking, educational programming and community initiatives. Formerly the National Community Engagement Director for World Vision, she served as a catalyst, partnership broker, and builder of the capacity of local partners in multiple locations across the US to improve and sustain the well-being of children and their families.  She is also co-founder for HERitage Giving Circle and the owner of Soulstice Consultancy.

Dr. Booker-Drew was a part of the documentary, Friendly Captivity, a film that follows a cast of 7 women from Dallas to India. She is the recipient of several honors including 2019 Dallas Business Journal's Women in Business honoree, Alpha Kappa Alpha, Inc. Global Big Heart 2014, semi-finalist for the SMU TED Talks in 2012, 2012 Outstanding African American Alumni Award from the University of Texas at Arlington, 2009 Woman of the Year Award by Zeta Phi Beta Sorority, Inc. and was awarded Diversity Ambassador for the American Red Cross.

Froswa’ graduated with a PhD from Antioch University in Leadership and Change with a focus on social capital, diverse women and relational leadership. She attended the Jean Baker Miller Institute at Wellesley for training in Relational Cultural Theory and has completed facilitator training on Immunity to Change based on the work of Kegan and Lahey of Harvard. She has also completed training through UNICEF on Equity Based Evaluations. Booker-Drew has been an adjunct professor at the University of North Texas at Dallas, the University of Texas at Arlington, Capital Seminary and Graduate School as well as a Post-Doctoral Fellow at Antioch University.  She is the author of 2 workbooks for women, Ready for a Revolution: 30 Days to Jolt Your Life and Rules of Engagement: Making Connections Last. Froswa’ was a workshop presenter at the United Nations in 2013 on the Access to Power. She is a contributor for several publications globally, including as an advice columnist for professional women in Business Woman Media, a global platform based in Australia.