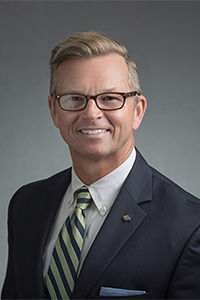 Active in banking since 1991, Eric C. Brown serves as President - Mississippi Gulf Coast of Trustmark National Bank.  Brown, a native of Alexander City, Alabama, received a Bachelor of Arts degree in economics and a Master of Business Administration degree from Tulane University and a Doctorate of Business Administration degree from Nova Southeastern University.  He is also a 2006 graduate of the Graduate School of Banking at Louisiana State University.  Active as a university lecturer since 1996, Brown serves as an adjunct faculty member of Tulane University and two other universities.

Active in the community, Brown served as President of the Gulfport Chamber of Commerce in 2007.  He also served as Chairman for the Spanish Trail District of Boy Scouts of America (2010-2011), President for the Gulfport Rotary Club (2011-2012), President for the Greater Biloxi Economic Development Foundation (2013), Chairman of the Board of Directors of Lynn Meadows Discovery Center, Mississippi’s first children’s museum (2010-2012) and President of the Mississippi Gulf Coast Chamber of Commerce (2015).

He is married to the former Suzanne “Mimi” Browne of New Orleans, Louisiana.  They have three children, reside in Pass Christian and are active members of Holy Trinity Parish.  He reigned as King Christian LXXXI for St. Paul Carnival Association in 2011 in Pass Christian.  In his free time, he is an avid runner, occasionally fishes and golfs, and most importantly, spends time with his family.  He has completed six marathons and numerous half marathons.

What is the best advice you've ever received?
Work hard and luck will follow.

If you could travel anywhere, where would you go?
I plan to spend an extended vacation in Italy. I would love to rent a villa in the Tuscany region for a month and then branch out travelling to Rome and Venice.  Of course, while in Tuscany, I would visit Florence.