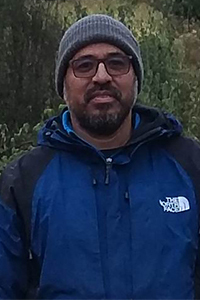 Bebel Ibarra is a Peruvian archaeologist and Ph.D. candidate in Anthropology at Tulane. His research focuses on Mortuary Variability. He is leading the Huari – Ancash Bio-archaeological Project since 2007.  He started his research in Huari (Peruvian north highlands) in 1997 while studying for a BA degree at San Marcos University in Lima. He has worked with local government institution (Municipalities) in the protection and research of archaeological site and his native town of Huari, where he was recognized for his contribution to local Pre-Hispanic history.

Mr. Ibarra also has edited several books and written articles about archaeology. He has founded the Institute of Huarinos Studies in Huari, a research center where scholars both national and foreign can gain access to data collected during several years of excavations. Among those are scientists from the University of California Santa Cruz who are studying DNA and isotopes from material recovered by him, and scholars from Tulane and Harvard University studying animal remains and pottery. Mr. Ibarra encourages local archaeologists to research the region.

He has followed doctoral studies in the University of Paris (Universite de Paris 1 Pantheon-Sorbonne), and traveled through different parts of the world, including Europe and Sudamericana. He’s lived in New Orleans since 2013, married with three children, and loves to cook and walk around the town.

If you could be on any reality TV show, which would you choose and why?
An archaeologist show where you live on the field.

What are your favorite activities when you are not working?
Cook.

What is the best advice you've ever received?
Respect the mountain, it is alive.