Through ‘blessings and determination’ SoPA student excels in class, career 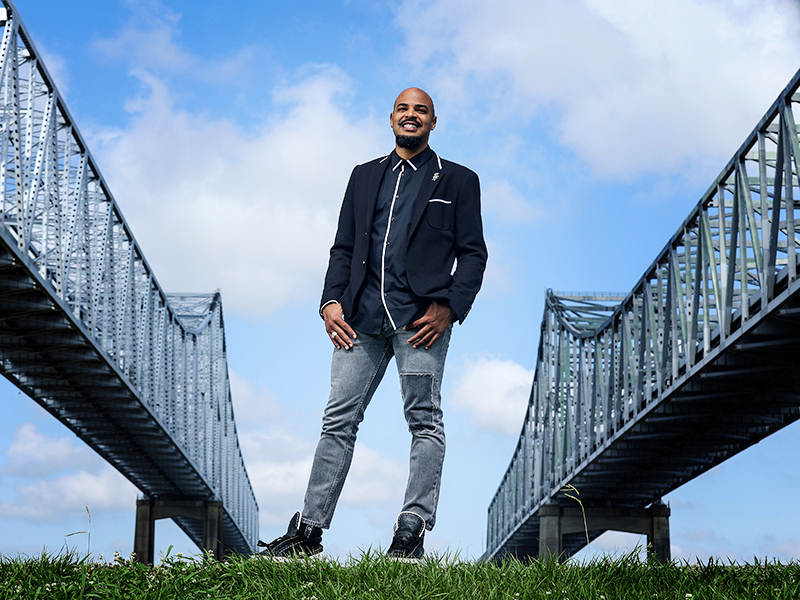 Derick Houston Jr. is a 2021 graduate of the Tulane School of Professional Advancement. (Photo by Rusty Costanza)

Derick Houston Jr.’s journey to — and through — the Tulane University School of Professional Advancement (SoPA) isn’t unusual. But his motivation and work ethic are in a league of their own.

Houston, 35, said he did not immediately consider Tulane as a teenager due to the financial burden he worried it would place on his family. But in 2014, nearly 10 years after high school, he made the decision to earn a degree at his own pace. And SoPA, he said, was a perfect match.

This month, Houston not only received his Bachelor of Arts in Social Sciences with a minor in small business development, he was also the 2021 commencement speaker for SoPA’s diploma ceremony and a recipient of the prestigious Tulane 34 Award.

“I came from humble beginnings,” said Houston of his upbringing on the westbank of New Orleans. “The sacrifices my parents made to put my sister and I through private schools were definitely part of my motivation to keep going.”

Though his parents were part of his motivation, Houston also has a 16-year-old son who maintains his own list of impressive accomplishments.

“In 2005 I was hit with two curve balls,” recalled Houston. “Hurricane Katrina interrupted my college education and I found out that I was going to be a father. It was through a combination of blessings and hard work that I was able to find a career and really excel at it.”

Unlike traditional college students who earn degrees that’ll help them enter the workforce, Houston arrived at SoPA with an already flourishing career as a financial advisor.

Houston currently serves as a private client advisor and vice president of investments at JP Morgan.

“I always thought that the most direct path to financial success was to become a doctor,” said Houston. “Now that I know this isn’t the case, I want to do all that I can to help young people understand that there is more than one road to wealth.”

Houston accomplishes this mission by volunteering with local organizations to teach financial literacy at high schools and universities in the Greater New Orleans area.

“I’ve overcome great odds as a black man in this country, at Tulane, and in my profession,” said Houston. “I’m truly honored and humbled to be living this moment and I’m so thankful to everyone at SoPA who has helped me along the way.”