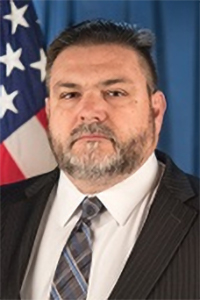 Jere Miles is the Assistant Director (AD) for OTCD, which provides all ICE components with cutting-edge electronic surveillance equipment and support to assist with criminal investigations and national security operations.  OTCD also encompasses the Cyber Crimes Center, which brings together highly technical assets dedicated to conducting trans-border criminal investigations of internet-related crimes, and the Innovation Lab, which is responsible for the development and deployment of enterprise-wide law enforcement technology, focusing on enhancing its uses, conducting research and development, and purchasing and deploying systems and applications.  AD Miles is responsible for supporting HSI operations by managing computer technology, data management, executive information reporting, information sharing and infrastructure management, and technical operations.

Prior to beginning his career as a Federal Criminal Investigator, AD Miles served in the United States Army’s 82nd Airborne Division from 1984 until 1992, where he participated in Operation “Just Cause.”  After his honorable discharge, he served as a Deputy Sheriff in South Carolina from 1993 through 1999, holding the positions of Patrol Deputy, Vice Detective and Resident Deputy Investigator.

AD Miles began his federal career in November 1999, with the U.S. Customs Service (USCS) as an Air Enforcement Officer.  In December 2000, he was converted to a Criminal Investigator and assigned to work in the USCS Special Agent in Charge office in Miami, FL.  During his Federal career, AD Miles has spent 7 years overseas in the Republic of Mexico, and held numerous leadership positions in both Homeland Security Investigations field offices and Headquarters.