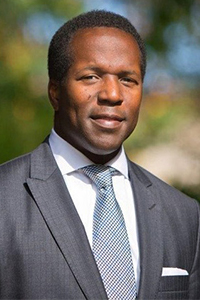 As Vice President for Civic Engagement and External Affairs, Derek Douglas serves as an Officer of the University of Chicago and leads the University’s local, regional, national and global efforts with respect to civic engagement, corporate partnerships and urban development. In this regard, Douglas leads the University’s efforts to engage with, and have a direct impact on, the lives of people living in Chicago and in cities across the country and around the world.

To that end, Douglas manages a portfolio that includes a number of the outward-facing operating units of the University, including: Commercial Real Estate/Economic Development, Office of Business Diversity, Office of Civic Engagement, Office of Corporate Relations, and the Offices of Federal and State Government Relations. In addition, Douglas has oversight responsibility for the civic/community engagement work of the University of Chicago Medical Center (UCMC), spearheads the University’s global cities work in partnership with the Global Engagement Office, and sits on the three-member Executive Committee for the Polsky Center for Innovation and Entrepreneurship, which governs the University’s innovation and entrepreneurial activities.

From 2009 through 2012, Douglas served on the White House Domestic Policy Council (DPC) as Special Assistant to President Barack Obama for Urban Affairs, where he led the White House’s work on urban and metropolitan policy issues. Prior to his White House service, Douglas worked as Washington Counsel to New York Governor David A. Paterson and Director of the New York State Washington, D.C. Office. In this capacity, Douglas acted as the Governor’s chief architect for federal policy and oversaw federal policy development and advocacy on domestic, economic, regulatory and urban policy issues for the State of New York.

Douglas also has served as Associate Director of Economic Policy at the Center for American Progress (CAP) where he founded and served as Director of the Economic Mobility Program. Prior to joining the CAP, Douglas was a Counsel at O’Melveny & Myers LLP and an Assistant Counsel at the NAACP Legal Defense and Educational Fund.

Douglas is a Senior Fellow and Lecturer at the University of Chicago Harris School of Public Policy, a Nonresident Senior Fellow at the Brookings Institution’s Metropolitan Policy Program and a Fellow at University of Pennsylvania’s Penn Institute on Urban Research (PennIUR). Douglas also is a member of the Business Leadership Council, Chicago Club and the Economic Club of Chicago.

Douglas graduated from the University of Michigan with Highest Honors in Economics and from the Yale Law School.