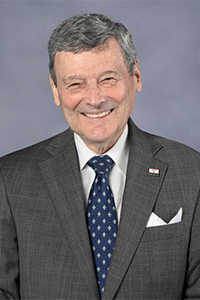 Colonel Terry Ebbert, United States Marine Corps (Ret.), serves as the Director of Public Safety & Homeland Security for the City of New Orleans. Prior to this appointment he worked as the CEO of Ebbert & Associates created to provide consulting, planning, training, and education in all aspects of emergency preparedness, public safety, disaster management and security matters.

Colonel Ebbert completed a distinguished career in the United States Marine Corps where he was assigned as the Military Secretary to the Commandant of the Marine Corps and Commanding Officer of The Basic School for Marine Officers. He was awarded the Navy Cross for actions as a Company Commander in the Republic of Vietnam.

Colonel Ebbert previously served as the Director of Homeland Security for the City of New Orleans from 2003-2008. In this role he was responsible for the administration and leadership for all Public Safety agencies, which included Police, Fire, Emergency Medical Services, Emergency Preparedness and Criminal Justice organizations. Serving as "Incident Commander" during Hurricane Katrina, he coordinated all local, state, and federal response to New Orleans during the largest disaster in the history of the United States. Colonel Ebbert's views have been documented in extensive federal testimony, books, articles, television, lectures, and personal sessions with the White House and Department of Homeland Security. His input has led to the creation of national reforms for emergency planning and operations. His extensive congressional testimony and work with the White House after action report team brings a unique understanding for emergency preparedness expectations of multiple Federal, State, and Local agencies.

Colonel Ebbert's additional positions have included serving as the Director of the New Orleans Police Foundation and as the Director of Security for the National Strategic Petroleum Reserve. He was selected by the University of Maryland's Center for Health and Homeland Security; and approved by the U.S. State Department, to be a primary instructor for international delegations attending Senior Crisis Management seminars hosted by the U.S. Department of State Office of Antiterrorism Assistance. Seminars were held with Malaysia, Indonesia, Kenya, Mali, Turkey, Ecuador, Bangladesh, Saudi Arabia, and Nigeria. Colonel Ebbert led a team selected by the U.S. Department of State to create and deliver extensive "Pipeline Security Training" to the leadership of the Secret Service Department of Pipeline Protection in Azerbaijan. The instruction included students from Lieutenant to General Officer. He recently deployed to Bulgaria and Tanzania, to train senior government officials to enhance their understanding of the United States Incident Command System and a Unified Command concept to assist in counter terrorism planning and response.