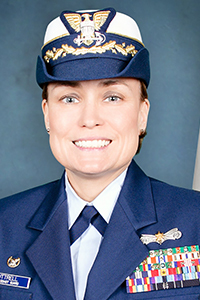 Captain Luttrell assumed the role of New Orleans Sector Commander in July 2018 after serving two years as the Deputy Sector Commander.  Her previous operational tours include serving as the Response Department Head at Sector Delaware Bay in Philadelphia, PA from 2010-2013 where she oversaw maritime Search and Rescue, Law Enforcement and Pollution Response operations for Pennsylvania, New Jersey and Delaware.  From 2004-2007 she served as the Operations Officer at Group Galveston and the Command Center Supervisor at Sector Houston-Galveston, TX.  In this capacity, she supervised 3 patrol boats, a construction tender, 3 multi-mission stations, 3 Aids to Navigation Teams and a 30 person operations center.  She also served as a Deck Watch Officer on USCGC DURABLE homeported in St. Petersburg, FL from 1994-1996 where she participated in Operations Able Manner and Able Vigil during the mass migrations from Haiti and Cuba.   Prior to that she was assigned as the Assistant Operations Officer at Group Milwaukee, WI from 1993-1994.

Captain Luttrell’s staff tours have included assignments to the Eighth Coast Guard District in New Orleans, LA as the Assistant Director of Auxiliary, Command Duty Officer and Aide to the District Commander. The Seventh Coast Guard District in Miami, FL as the Command Center Chief where she was responsible for search and rescue and migrant interdiction case prosecution for the Florida Straits, Southern Atlantic and Eastern Gulf of Mexico.  The Department of Homeland Security Office of Policy as a Program Analyst and Planner responsible for the Department’s Maritime Mass Migration Plan.  Coast Guard Headquarters in the Office of Planning and Performance (CG-81) and the Office of Boat Forces (CG-731).

A 1993 graduate of Officer Candidate School, Captain Luttrell holds a Bachelor of Science Degree in Business Management from Carson-Newman College in Jefferson City, TN, and a Masters Degree in Public Administration from George Mason University in Fairfax, VA.