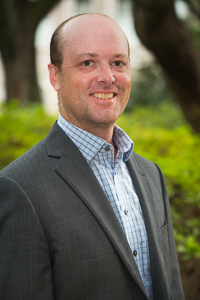 Shane Gassaway is an Adjunct Assistant Professor in the Tulane University Philosophy Department, where he teaches courses in the History of Philosophy, Logic, and Applied Ethics. Dr. Gassaway’s research focuses on Plato’s moral philosophy. He teaches at SoPA and at Delgado Community College, and is a copy editor for Conscious Company Magazine.

Dr. Gassaway received his Ph.D. from Tulane University and has a bachelor’s degree in Liberal Arts from St. John’s College in Santa Fe, New Mexico. He also has a Class B Commercial Driver’s License and dabbles in landscape gardening. In his youth, Shane and his friends formed a breakdancing crew called Natral Flava [sic].

What are your favorite activities when you are not working?
I am a bicycle commuter and enjoy reading philosophy, fantasy fiction, and The Economist. I also spend a good bit of time looking at funny animal pictures on the internet.

Who has influenced you most in life?
Two of my tutors (professors) at St. John's College, Michael Grenke and Lise van Boxel, have probably influenced me more than anyone else in my life. When I first met and studied with them, my interests were widespread and I did not know what I was going to do after college; they helped me to see that I was primarily motivated by philosophical questioning, and to decide that this was what I wanted to pursue for the rest of my life.

What's the first career you dreamed of having as a child?
After a mishap that resulted in my brother getting stitches (it was an accident, I swear!), I decided I wanted to be a medical doctor.

Needless to say, I ended up becoming a different kind of doctor.