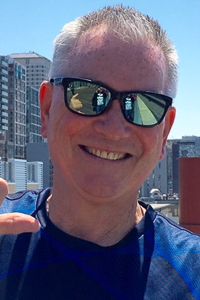 Mr. Kleinman graduated from Texas Tech University in 1973. While serving in the United States Air Force, Mr. Kleinman earned his Master of Arts degree in English from St. Mary’s University (San Antonio, Texas). Upon completion of military service, Mr. Kleinman taught high school English for fifteen years. He presently resides in Biloxi, Mississippi where he has for SoPA for the past nine years.

What are your favorite activities when you are not working?
I enjoy writing screenplays in my spare time and have written numerous award winning scripts. Upon completion of The Elusive Louie, The Kingsmen loved the script so much they invited me to attend one of their concerts commemorating the 40th anniversary of the movie Animal House. I traveled to and from the concert with drummer Dick Peterson and lead guitarist Mike Mitchell. The Kingsmen rocked.

If you could travel anywhere, where would you go?
A lover of World War II history, I recently traveled to Guam, Iwo Jima, and Peleliu. I stood on the black sands of Iwo Jima and stood atop Mount Suribachi (overlooking the landing zones). I also roamed the jungles of Peleliu exploring Japanese caves for four days. It was great!

What's the first career you dreamed of having as a child?
It's a tie. I wish I would have had the guts to travel to Hollywood and pursue a career in acting. I cowardly took the easy way out and opted for the sure monthly paycheck. I also would have loved to become a major league baseball player. I was quite good at the sport. I am an avid Houston Astros fan! Springer rocks!